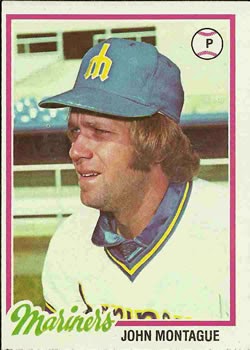 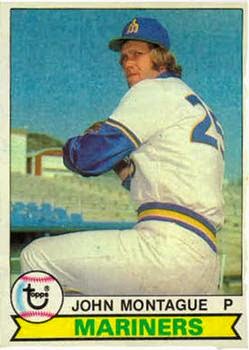 In the 1965 draft the Chicago White Sox took a shot on John in the 15th round. He decided not to sign and went to school at Old Dominion University. Two years later, the Baltimore Orioles came calling in the 3rd round of the 1967 draft. John would weave his way through their minor league system only to find himself traded to the Montreal Expos at the beginning of the 1973 season. The good news is that would turn into John making the majors as a September call up in that season. While he did mediocre with the Expos, they decided in late 1975 that is was time for him to go and he was put on waivers only to be claimed by the Philadelphia Phillies. The Phillies weren't impressed to say the least and let John spend 1976 with the Oklahoma City 89er's in AAA. In November of 1976 the new Mariners team purchased his contract and brought him in to be part of the new team in Seattle. He would spend the entire season here, and was sidelined off and on in 1978 with a hip pointer. John would still be in Seattle during the All Star season of 1979 only to be traded down the coast to the California Angels in late August for a  player to be named that would eventually be Jim Anderson. Jim would stay with the Angels until he was released before the 1981 spring training and would spend that year's camp with the Blue Jays but was let go before the season. Deciding that he wasn't done, John went south of the border to play for the Aguascalientes Rieleros in Mexico and was with them in 1981 and 1982, before spending some time with the Mexico City Tigres in 1982. At the age of 35 and two years in Mexico, Mr. Montague gave and b=called it quits from baseball.
Posted by Mariner1 at 7:09 AM