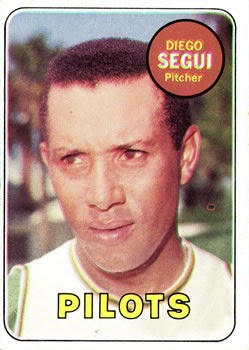 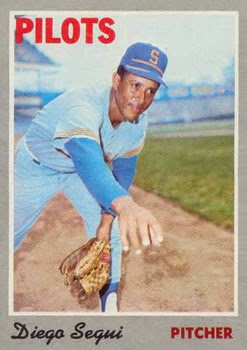 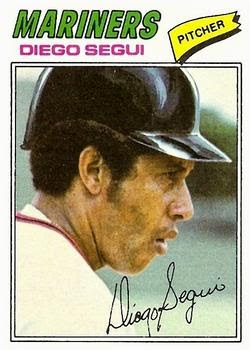 If you want any quirky notes of the Mariners record book you will probably find Diego is connected to many of them. He is the only player to ever be part of two Seattle MLB franchises. He was drafted with the 14th pick from the Oakland A's in 1968 by the Seattle Pilots. He would be named the team's MVP for that ill fated 1969 season and because Charlie Finley wanted him back so badly, he would trade for him to come back from the new Milwaukee Brewers before the 1970 season. After stops in Oakland, St. Louis and Boston, the new expansion Mariners decided to purchase Diego from the Padres before the 1976 expansion draft at the age of 40. It was done as a stunt to the baseball fans in Seattle to bring back a Pilot. The Mariners thought is was so good that they made him the Opening Day starter and he would through the first pitch in team history. Diego would only be with the team for the first season in 1977 before being released.

Diego has a way with being with the original rosters of teams in his life. Before coming to the Mariners he played for the Hawaii Islanders in 1976. When the Islanders were started as a team in the PCL in 1961, one of those original players was Diego Segui. He was the only person to be a Pilot in 1969 and a Mariner in 1977. Diego was a man that could not let any chance to play baseball pass him by. After his time in Seattle for the second time, he went south and would spend 8 more seasons pitching in Mexico. He would be with the Cordoba Cafateros in 1978 and 1979, move on to the Reynosa Broncos from 1980 through 1982. In 1983 he would be with the Yucatan Leones, and 1984 would be a year with the Leon Bravos. Diego would spend his last year with the Mondove Acereros in 1985 and finally retire at the age of 47 or 48 depending on which reports you believe.

Diego would also create a baseball legacy by having his second son David also play in the majors. The Mariners being a team that was always able to see a marketing opportunity and needing a first baseman, would sign David after the 1997 season. The timing couldn't be better as the Mariners would move into the new Safeco Field in July 1999. That would mean that the old Kingdome would have to close it's Mariner chapter. On June 27th of that year the final Mariner game would be played under the dome. In a great ceremony of past and present players there was ceremonial final pitch in the Kingdome. The man that would throw that pitch would be none other than the man that threw the first, Diego Segui. The person that would receive it would be his son and current Mariner David. When the new park opened on July 15th David was a part of the team only to be traded 13 days later to the Toronto Blue Jays. Diego and his son David were part of one of the two Father-Son combinations in Seattle with Ken Griffey and Ken Griffey Jr. being the other.
Posted by Mariner1 at 7:23 PM