When you are a kid playing baseball your dream is to play for your hometown team. For Gary that was the case. After attending high school in Fullerton and going to college at UC Irvine, he would be selected by the California Angels in the 6th round of the 1974 draft. Gary would pack up and head for Quad Cities for almost the rest of the season only to be promoted to Salinas for two games to finish the season. Mr. Wheelock would make a big jump moving to AAA Salt Lake City for the 1975 and 1976 seasons. Gary did so well in his second season in Salt Lake that he earned a call to the Angles to end the '76 season and got lit up in two appearances with only two innings pitched.  During the expansion draft for the 1977 season, the Mariners saw something they liked by taking Gary with the second pick in the draft. While it is difficult to have good stats with an expansion team, Gary would start 17 games for manager Darrell Johnson during the that season. Sadly with the addition of some pitchers in the offseason, Gary would be at AAA San Jose in 1978, and when the Mariners switched their AAA affiliation to Spokane, Gary spent 1979 in Eastern Washington. Gary would see the Mariners one more time for a start in the Kingdome against the Minnesota Twins on April 18th before spending the rest of the 1980 season back in Spokane. The Mariners would let Gary go after the 198 season, and he would sign with his other team from home in the Dodgers. Gary would get into 9 games in 1981 with the AA San Antonio Dodgers. After those nine games, he would become their pitching coach for that season and for the 1982 season.

The Mariners decided to bring Gary back to the family by hiring him as the roving pitching instructor between 1983 and 1986. Gary would decide to take a job with the AAA affiliate of the Rangers in the Oklahoma City 89'ers during the 1987 season under manager Toby Harrah. He would come back to the Mariners family in 1988 spending time as the pitching coach with the Bellingham Mariners for four seasons. Gary would be the pitching coach for the San Bernadino Spirit in 1992, before coaching the Peoria Mariners from 1993 through the 1995 season. For the next three years it was back to the Everett AquaSox, only to head back to Peoria from 1999-2002 and once more in Everett in 2003. Gary decided he liked the warm weather more and would be the pitching coach in Peoria from 2004 through the 2011 seasons. This upcoming season will be Gary's 31st in the Mariners organization as a coach while he spends his third season as the Rehab Pitching Coordinator. 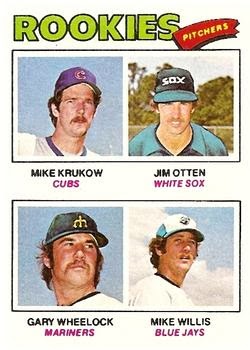 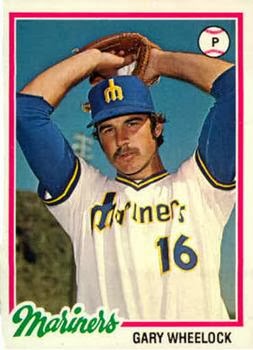 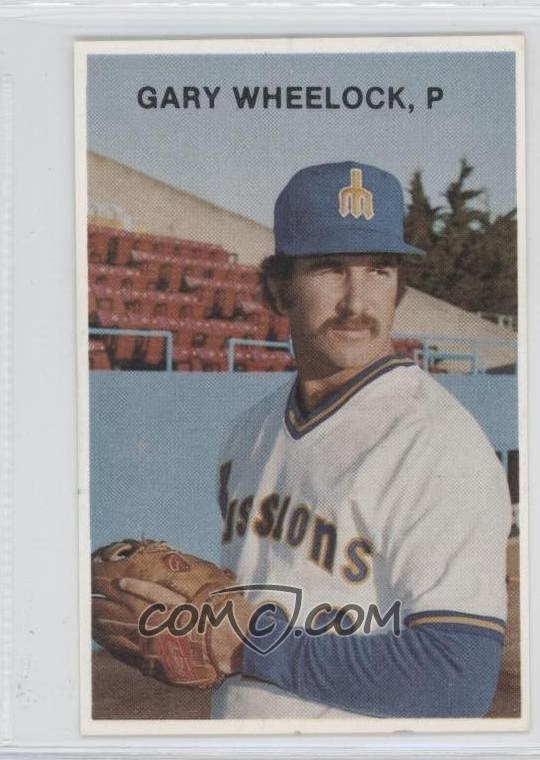 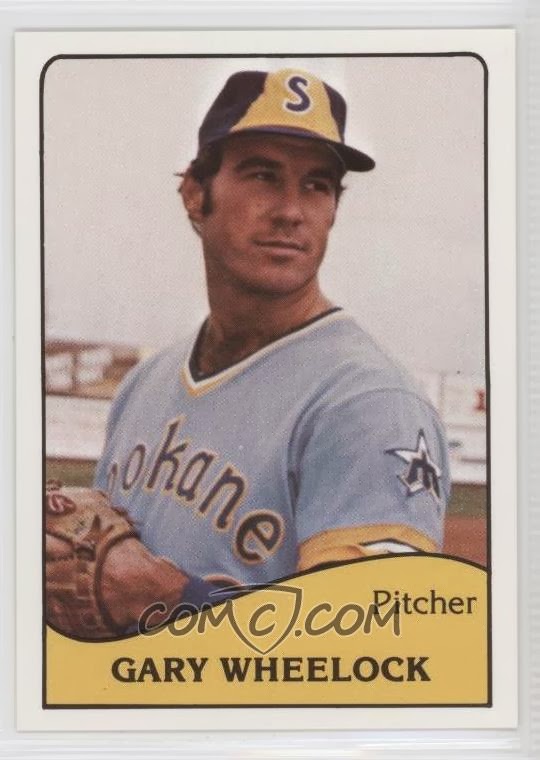 You must have some talent if in June of 1965 the Kansas City Athletics draft you in the 3rd round, and the Washington Senators choose you again in the 1st round in January of 1966. Bob decided that he didn't want to sign with either club and was again selected, this time 15th overall by the Los Angeles Dodgers. Bob would work his way through rookie ball all the way to AAA Spokane in the Dodgers minors. On September 23, 1969 Bob was finally able to see the big leagues with the Dodgers. He would get a chance in 4 games in both 1969 and 1970, but with both Tom Haller and Jeff Torborg as regular catchers and Joe Ferguson coming up Bob was expendable. Right after the 1970 season, the Dodgers sent Bob to the Cardinals with Ted Sizemore for Dick Allen. A short time in St. Louis would find Scrap Iron moving to Houston in a trade for future one game Mariner manager Mariner Marty Martinez. A future with the Astros didn't seem apparent either when his contract was purchased by the Montreal Expos. Bob was given sparing playing time with the Expos, and was traded to the Kansas City Royals before the 1975 season. For two seasons in KC, there was a lot of time on the bench as Bob was used only at times and not on a regular basis.

On November 5th of 1976, the Mariners and Toronto Blue Jays were able to select players from current MLB rosters in the expansion draft. With their 13th pick in the draft the Mariners selected Bob from the Royals organization. As a veteran wit big league experience, Bob was immediately thrust into the job of everyday starting catcher for the new club. "Scrap Iron" would hold it down behind the plate for the first two Mariner seasons in the Kingdome and on the road. Before the 1979 season the M's picked up Larry Cox from the Cubs, and Bob was starting to play less. By the next year in 1980 the Mariners also now had Jerry Narron in the catching rotation and Stinson was basically forgotten about and was not playing nearly at all. Bob saw his last action on August 1st of that 1980 season, and was subsequently released by the team a week later. Bob was done with baseball by the time the 1980 season was done, but Bob will always be part of the original Mariner history. 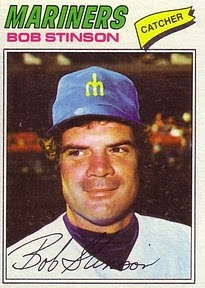 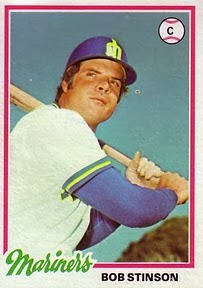 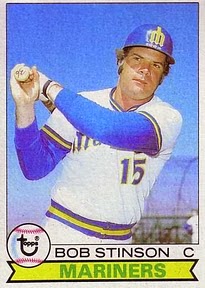 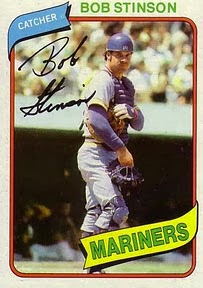 If you were an 18 year old kid in the Dominican Republic in 1972, what would you do if the Los Angeles Dodgers offered you a chance? Like anyone you would jump at the opportunity. That's exactly what came Jose's way. It would take some work, but Jose would work his way up to AAA with the Dodgers but hardly any hope of cracking the roster with Dave Lopes entrenched at second base in a top notch infield. Jose would be sold to the new expansion Seattle Mariners with a chance to play everyday. Jose would make the most of his chance taking the majority of time at second. Jose does hold the distinction of collecting the first hit in Mariners history. As the #2 hitter in the bottom of the first inning, Jose would collect a single to right field off Frank Tanana. After having a very slow start to the 1978 season, the Mariners would trade Jose to the St. Louis Cardinals for a player to be named later. Mr. Baez would never make it to the Cardinals, and would be released before the 1979 season. After spending two seasons between the Dominican and Mexico, Jose would hang it up as a player. Jose would do some time as a hitting coach in Fort Wayne in the 90's and also worked in the Nationals Dominican developmental system. Jose would eventually be fired by Washington in a messy situation involving players lying about their ages. 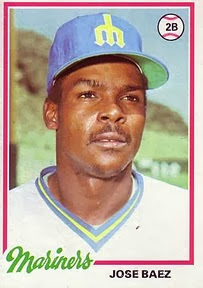 If you were picked with the 22nd pick in the 1st round of the draft in 1971 you would think you were on the fast track to the big leagues right? That wouldn't be the case for Craig. He would make a slow climb to the top. After rookie ball, it was A ball, then a jump to all three levels, only to stay at AAA for three seasons getting the common late season call up in 1975 and 1976. The Pirates decided that they might need a little more pitching to make their run in the late 70's and decided to send Craig and Jimmy Sexton to Seattle for Grant Jackson. The Mariners knew they were in need of a starting shortstop and they would find him in Craig. He was so counted on that he would be the Mariners All Star representative in the 1978 game in San Diego. Craig didn't get to play as Freddie Patek played the whole game at SS. After two solid seasons at short, Craig was again the victim of the dreaded 'we need pitching" syndrome. The Mariners would send Craig to his hometown team in the Houston Astros, getting Floyd Bannister to come to Seattle in return. Suddenly he was home and would spend the next 11 seasons in Houston, finally retiring after the 1989 season. After baseball Craig felt a higher calling as is currently a pastor at the North Campus of the Second Baptist Church in Houston. 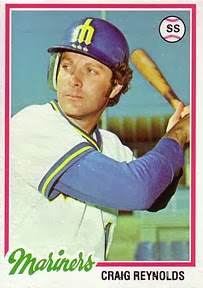 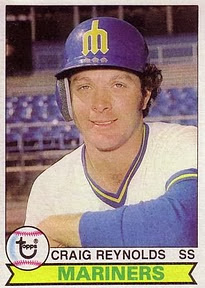 If you are drafted in the 5th round while you are finishing playing for NC State, you would think there is a chance you might make the big leagues fairly soon right? That would not be the case for Tommy. After struggling to make the year after year climb through the minor leagues, Tommy was mostly relegated to the obligatory call up in September with the Cleveland Indians from 1973 through the 1976 seasons. With the 29th out of 30 selection of the expansion draft, the Seattle Mariners selected Tommy to help play in the outfield for the new team. During the first three months of the season, Tommy got some time in right and left. Then is was back down to the minors only to see three more game in September of that 1977 season.

Tommy would be let go by the Mariners organization after that first season, and tried to catch on with both the Angels and Orioles farm systems. Mr. Smith tried to move into the infield working at both 1st and 3rd base. When playing the corners didn't work out, Tommy even started trying to take a turn on the mound as a pitcher in 1981 with the class A Miami O's, and the AA Charlotte O's. During that time, Tommy did see the mound for 48 appearances. After shutting it down in 1981, Tommy moved back home to North Carolina, and in 1984 he would start giving private lessons to young players and started doing baseball camps. He decided to make it a business and for the last 29 years, he has been the head instructor at Diamond Stars Baseball in Raleigh, NC. 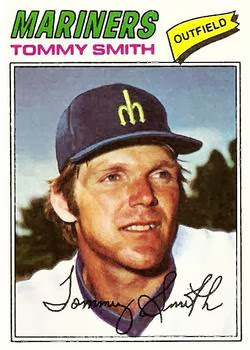