Tommy Moore was in college in Cerritos, CA and would be chosen by the Minnesota Twins in 1969. He decided not to play for them and would stay in school only to be chosen the next year by the New York Mets. Tommy decided to take a chance and would slowly make his way through the Mets system to get a chance in three games in 1972 and 1973. Tommy would spend 1974 with the Tidewater Tides in 1974 and would be sent to the St. Louis Cardinals after that season for Joe Torre. After getting to see a little time with the Redbirds, Tommy was sent to the Texas Rangers in June of that same '75 season.  The Rangers thought it was best for Tommy to be with the Sacramento Solons for the 1976 season, and the Mariners would buy his contract after that season. The Mariners coaching staff decided to have Tommy in the bullpen to start the season, and he would hit the mound in 14 games before spending the rest of the season with the Spokane Indians in AAA. After the first season in Seattle, the team sent Tommy and Carlos Lopez to Baltimore for Mike Parrott. The Orioles would let Mr. Moore go after the spring of 1978 and that would be last we would see of Tommy Moore.


Jimmy Sexton was more than happy to sign with a team like the Pittsburgh Pirates as a free agent in the summer of 1970. It was a slow progression for him through the farm system for a marginal player with many good players ahead of him to the goal of the Pirates infield. After playing at AA Shreveport and AAA Charleston in the 1976 season, the Pirates would send Jimmy and Craig Reynolds to the Mariners in December to bring Grant Jackson to the Steel City. With Craig implanted to play for the M's, Jimmy would play for the San Jose Missions in 1977. When Seattle expanded rosters in September, Jimmy finally got his chance seeing his first time on September 2nd and would get into 14 games during that 1977 season. Two days short of being brought to Seattle, Jimmy would be sent to the Houston Astros to bring Leon Roberts to the Mariners. Jimmy would get good time for two years in Houston but would eventually get sent to Oakland, and would see AAA and major league time with the A's, White Sox, and Cardinals systems. Jimmy decided after a few games in AAA in 1984 he told the Cardinals he was done with baseball at age 32.

If you were an 18 year old kid and don't get drafted you would be disappointed. That would change if you were signed by a pitching rich team like the Baltimore Orioles. If you aren't a pitcher on that level of ability though, you can expect to spend some time in the minor leagues working on your game. If you really haven't had any good seasons and suddenly you turn it all around at AAA Rochester in 1976, you think good things. For Bob all it got him was unprotected for the expansion draft, and he would be chosen with the 21st pick by the Seattle Mariners. Because the Mariners didn't have a set farm system for the first year, players were all over the minors. Bob would spent a little time with the Toledo Mud Hens, and the New Orleans Pelicans in 1977. Finally on July 24th of the season, Bob made it to the majors with the Mariners for the first of 11 games. Seattle would let Bob go after spring training in 1978 and was quickly signed by the Milwaukee Brewers. Bob would stay in AAA for 1978, and would start 1979 in AAA only to spend most of the rest of the season in Milwaukee. Sadly, he would find his way back to AAA for the 1980 season. As is common, history would repeat itself as Bob would be released by the Brewers at the end of the 1981 spring, only to be signed by the Mariners. After a little time as a Spokane Indian, Bob would come across the state and be back with the Seattle Mariners. After being out of baseball for two seasons, Bob tried to come back with the Atlanta Braves in 1984, but would be with AAA Richmond that year and would let the game go after that year.

What do you do when you are consummate AAAA player? You the guy that's too good for AAA, but can't cut it as a major leaguer. That would be the ultimate description for a guy like Joe Lis. After bouncing up and down with the Philadelphia Phillies for a few seasons, Joe was able to try his hand with the Minnesota Twins. He was not able to find consistent time with the Twins due to an influx of better players, so Joe took his game to the Cleveland Indians. Sadly, Joe found it hard to translate his AAA ability to the big leagues. The break that Joe was probably hoping for came when the Seattle Mariners used their 23rd pick in the expansion draft to bring Joe to Seattle.  It didn't really come to be for Joe in Seattle as he only played in nine games in the first month, but did make his first attempt as a catcher on April 13th. Joe would last see the big leagues on May 8th and would play in Iowa and Toledo the rest of the 1977 season. Joe would take his talents to the Kintetsu Buffaloes in Japan for 1978, only to come back to the AAA Evansville Triplets for one last go. Joe would go on to coach the American Legion team from Evansville and would be followed by his son Joe Jr, who went from making it to AAA to coaching. Joe would also start the Joe Lis Baseball School in Indiana. Sadly, an original Mariner would sail his final voyage when at the age of 64, Joe succumbed to prostate cancer in 2010. 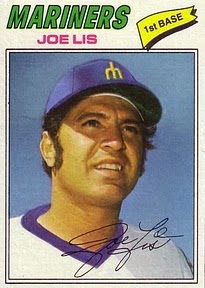 ﻿
Since Joe didn't get but nine games as a Mariner with the #18 uniform, you would think that if you were Kevin Pasley  you might not want the number next. Kevin was a catcher whose career path had kind of similarly mirrored Joe's. Kevin was a decent player in the minor leaguers coming up through the Dodgers organization out of high school in the Bronx. Kevin was given spot chances to shine in the end of a couple of seasons, but having star players in front of you at the position doesn't help your cause. After being named one of the "Dodgers players to watch" in 1977 by Baseball Digest, Kevin spent most of that season back with the AAA Albuquerque Dukes for the team. Finally on September 8th, the Mariners would purchase Kevin's contract form Los Angeles. Kevin would only see four games for the M's in '77, but would find his way into 25 games behind the plate for the M's in the 1978 season. For his coup de grace, Kevin would homer for last MLB hit on October 1, 1978 off the Texas Rangers' Fergie Jenkins. That is of little consequence except that only two players have homered in their last hit and had their number retired. Those two would be Ted Williams, and Kevin Pasley. Of course the only reason Kevin's # was retired was because somehow he wore #4 for the Dodgers but it was retired for Duke Snider who was with the team in Brooklyn and Los Angeles from 1947 through the 1962 season. Kevin would bounce around through many AA and AAA teams for seasons from 1979 through 1982 before finally hanging up the spikes.

I would think if you were picked in the 8th round in 1969 for an up and coming team you would think you have a good shot to make it. That's what happen for Glenn Abbott. Glenn would work his way through to make it as part of the 1973 A's that would go on to win a World Series title without him. He would be on the roster and win a ring with them the next year in 1974 though. Glenn would be part of history as the Athletics were the first team to throw a four man combined no hitter during the 1975 campaign. After the 1976 season the A's left Glenn unprotected and with the 12th pick in the expansion draft he was plucked up by the Mariners and dropped into the starting rotation.

Glenn was excited to follow pitching coach Wes Stock up to Seattle, but didn't realize the growing pains that came with an expansion team. He would win 12 games during the 1977 season which was just under 20% of the team's wins for the season.  During those first seasons, many players would come and go. The only constants were Glenn and longtime broadcaster Dave Niehaus. Sadly during the spring training of 1982 Glenn would have bone chips removed from his elbow, but couldn't get healthy afterward only to find that he had contracted viral meningitis. Due to loss of strength and weight it would cost Glenn all of the 1982 season. He would come back with the M's in 1983 only to have his contract purchased by the Detroit Tigers in August and would make it a year in the Motor City before being released in August of 1984 before the Tigers would make their championship run against the Padres.

Glenn was without work for long after calling it quits in 1984. Glenn has been a pitching coach in many cities since retiring including stops in Little Falls, Jackson, Tidewater, Huntsville, Tacoma, Midland, Modesto, Oklahoma, Spokane, Mobile, San Antonio, Portland, Savannah, and since 2012 he has been the pitching coach for the Binghampton Mets. You will find Glenn in the dugout with those Mets again for the 2014 season. 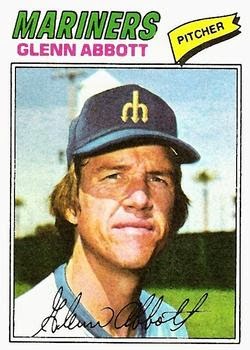 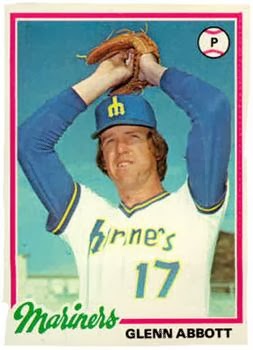 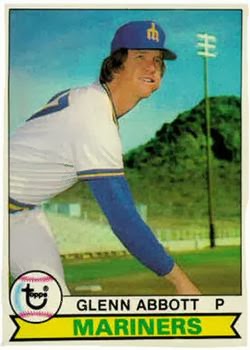 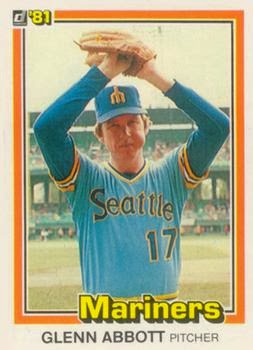 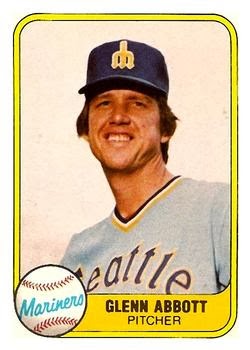 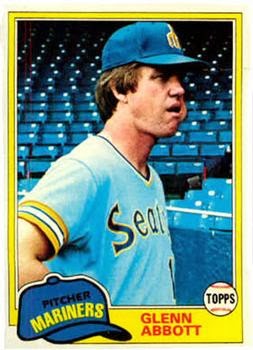 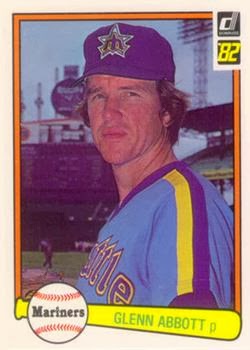 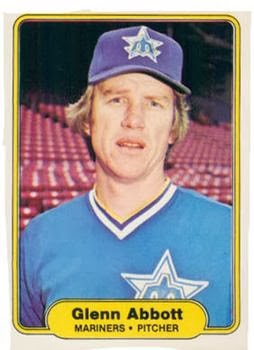 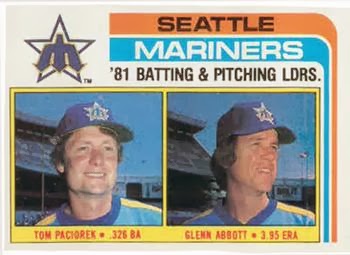 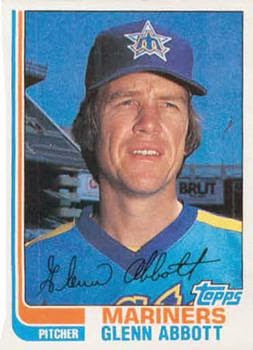