Believe it or not, Seattle has a long history of baseball. While the city would not see Major League Baseball until 1969, the first pro team would start in 1890 with a team called the Hustlers. To tell the story of professional baseball in Seattle prior to the Seattle Rainiers is to tell the story of Dan Dugdale. Dugdale's ties to baseball began six years before that in his hometown of Peoria, Ill. From 1884-95, Dugdale used his above-average talent as a catcher to play for 20 different teams in 13 different states.

In 1898, Dugdale arrived in Seattle seeking fortune from the Klondike Gold Rush. It only makes sense then that the first team he helped to build was the Klondikers. Later called the Rainmakers, Clamdiggers and Chinooks, the Klondikers were one of the pioneering teams in the Pacific Northwest League that became fully functional in 1901.


Keeping a baseball league in business at that time was no small feat, especially when there were other leagues competing for players and popularity. Dugdale was bought out in 1904 by the Seattle Siwashes of the Pacific Coast League and agreed to manage the Portland team in that league.
Then in 1907, Dugdale returned to Seattle and aligned the Siwashes with the Northwestern League. He also built Yesler Way Park on the corner of 12th Avenue and Yesler Way that year. While playing in that facility, the Siwashes were renamed the Turks and won the league pennant in 1909.

After another renaming, this time to the Giants, Dugdale again invested in a new stadium. Dugdale Park was located in Rainier Valley and was the first double-decker stadium built on the West Coast. The ballpark opened its gates in 1914. 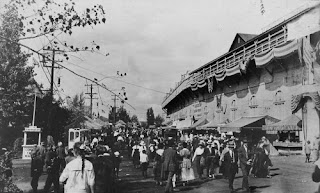 In all, Dugdale's teams won five pennants and produced many future Major League players.
Then, in 1919, the Pacific Coast League returned to Seattle and formed a team called the Rainiers. The team was renamed the Indians two years later and won the first PCL championship for the city of Seattle in 1924.
Tragically, Dugdale Park was burned by an arsonist in 1932 on the Fourth of July. The act forced the Indians, who had previously called that park home, to move to Civic Stadium. Located where Memorial Stadium stands today, Civic Stadium was known for its concrete-hard infield and large wooden light poles that were in play if struck by a ball. 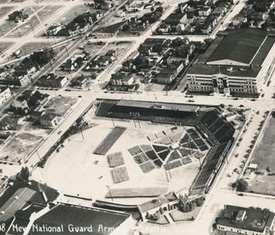 The next few years were tough ones for baseball in Seattle. It wasn't until 1937 when a man named Emil Sick came along that things started to turn around again. 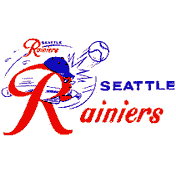 Although the Rainiers were charter members of the Pacific Coast League from 1903-06 and then rejoined the league in 1919 under the Indians title, it wasn't until 1937 when Sick bought the team and renamed them the Rainiers that the team began known as one of the marquee teams of the league.
From 1938-41, the Rainiers made six consecutive playoff appearances, winning pennants in three of those trips.
Previously known as the owner of the Rainier Brewing Company, Sick bought the team to help promote his brew. But Sick also opened his wallet for his new investment. In 1938, construction was complete on Sick's Stadium, a state-of-the-art ballpark for its time that was erected at the same place where Dugdale Park had been located. 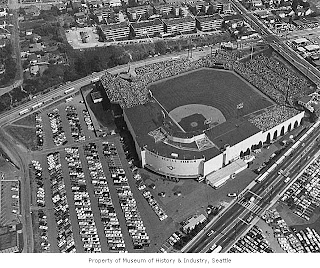 Rainiers games became one of the most popular things to do in Seattle during Sick's ownership. Following the new stadium's opening, the Rainiers led the PCL in attendance 11 of the next 20 seasons. For five of those years, they led all of the Minor Leagues as well. During the 1946 season, the short lived West Coast Negro League would have a team in Seattle named the Steelheads. The league would only last about two months.

The PCL was regarded as the most competitive league in the country after the American and National leagues during the Rainiers' heyday. The quality of play was extraordinary, as evidenced by future Hall of Famers Gaylord Perry, Willie McCovey and Juan Marichal beginning their baseball careers playing for teams in the PCL.
While no Rainiers players went on to become one of these all-time greats, the franchise did have its share of hometown favorites that had excellent playing careers. Three of the most prominent players from the Rainiers' back-to-back-to-back championships were "Kewpie" Dick Barrett, Bill Lawrence and Jo-Jo White. Barrett won more than 200 games as a Rainier, Lawrence was considered one of the best defensive center fielders of his time, and White played many successful seasons in the Majors before being traded to Seattle. Another famous name that came to the Rainiers was a manager for one year in 1951. Rogers Hornsby would lead the team to a 99-68 record, and would go onto win the PCL championship in that year.

Perhaps the most famous Rainiers player of them all, though, only played one season with the team. Franklin High School graduate Fred Hutchinson quickly became a fan favorite because of his hometown roots and incredible success. In the team's first season, "Hutch" won 25 games as a 19 year old in 1938. The Seattle Post-Intelligencer named him Seattle Man of the Year for his brilliance on the mound. Hutchinson was never able to pitch at that level again, but he did go on to manage for 12 seasons in the Majors with the Tigers, Cardinals, and Reds. Between Major League managerial stints, he returned to lead the Rainiers to the 1955 PCL pennant. He died of cancer at the age of 45 in 1964. 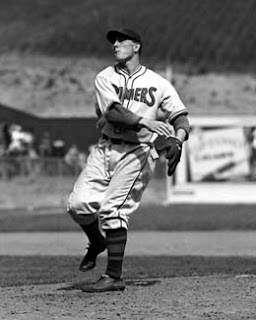 Meanwhile, the PCL began to lose its loyal following when the Major Leagues began to migrate to the West Coast. The Brooklyn Dodgers moved to Los Angeles and the New York Giants headed to San Francisco before the 1958 season. Businessman first, Sick saw the change coming and opted to sell the Rainiers to the Red Sox in 1960. The team would become a part of the California Angels organization from 1965 to 1968. While the team continued in Seattle, it was never able to regain the popularity that it generated while under Sick's ownership.
Posted by Mariner1 at 9:00 PM